Nerdy Mapping Fun with Faerun and Google Earth, Part I

Updated with a few math fixes
I purchased this awesome and massive detailed map of Northern Faerun by Mike Schley, a digital version of the one included in the Dungeons & Dragons Sword Coast Adventurer's Guide.
The map weighs in at 10200 x 6600 px — a little less if you shave the borders — and also comes with a 34 page even higher detail PDF version. If I get ambitious I might stitch that together and use that instead.
However, at this scale the map really needs to be on a globe, for which Google Earth will do nicely. Now, some literature suggests Toril is slightly larger than Earth, some literature says the same size, but as far as I know Google Earth doesn't allow for rolling out your own planets, so our Earth will have to do.
First off, it is easy enough to overlay an image in Google Earth. In the menu bar: Add | Image Overlay. Wait a bit for the image to load. Then, change to the Location tab in the New Image Overlay popup and click the "Convert to LatLonQuad" button. This will give you the ability to set the four corners independently.
The Edit Image Overlay dialog's Location tab then lists four corners with Longitude and Latitude. The 1st corner is Southwest (bottom left) then Southeast (bottom right), Northeast (top right) then Northwest (top left).
The map legend is about 1820px = 500 miles. After shaving the borders I ended up with a map that was about 2674 x 1696 miles. Further, I assumed that this is actually a Mercator projection and so the distances are accurate North-South, but that East-West the scale is only accurate at the middle of the map.
Given those assumptions, everything is nicely parallel, with the Southern edge of the map ending up at about 3,124 nautical miles while the Northern edge is only 2,074 nautical miles.
I picked a starting point where Baldur's Gate will end up roughly on top of Los Angeles, CA (Waterdeep at Ashland, OR and Neverwinter at Seattle, WA). Using formulas from Allen Wyatt's ExcelTips I started plugging numbers into Excel.
I converted each LAT/LNG pair into radians using this formula:
=RADIANS((DEGREES*3600+MINUTES*60+SECONDS)/3600) Then plugged a N-S pair into Excel, and adjusted, to get one edge using this forumula:
=ACOS(SIN(LAT1)*SIN(LAT2)+COS(LAT1)*COS(LAT2)*COS(LON2-LON1))*3443.89849 With that done, I took the mid-point between the North South edges, and plugged those into the same formulas to get the East West coordinates. I plugged those numbers back into the Google Earth location tab on the image overlay. And success! 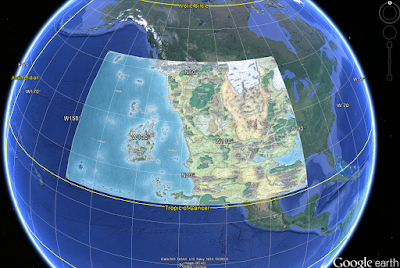 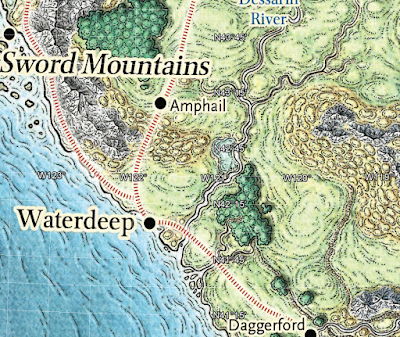 Hard to see here but if you look close you can see the latitude and longitude markings. The final values I used were: