Nerdy Mapping Fun with Faerun and Google Earth, Part II, Stitching it Together

In Part I, I discussed the process of getting this this awesome and massively detailed map of Northern Faerun by Mike Schley, onto Google Earth.

In addition to the map I originally used there is a ~34 part PDF version at about 2x the resolution of the JPG image. So, I decided to try using this and adding multiple image maps that I could tile together.

For this, I copied each PDF page into Paint.NET and alligned them. This turned out to be a bit of work as, in some cases, some of the images were off by a pixel or two. I'm not sure if this is an artifact of the conversion to and from the PDF or maybe my accidentally nudging pixels around as I worked. However, after some effort I had a nice 645 MB Paint file.

I then stripped the borders and cut the image into 4 equal 9735x6175 pngs. Before being optimized each image was about 140MB, after about MB.

I then ran a similar process as in Part I, bringing in the image, converting the coordinates to radians, measuring the distance between points and adjusting until they matched the map dimensions. As before, the North–South dimensions match the map, but only the mid-point line is accurate, with the Southern border stretched and the Northern border compressed.

And looks good with double the resolution of the map in Part I. 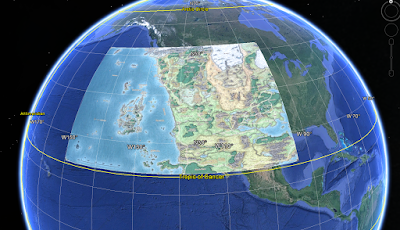