In Part I, I discussed the process of getting this this awesome and massively detailed map of Northern Faerun by Mike Schley, onto Google Earth.
Anonymous commented on Part I that he thought the map should be shifted North. My position was based on trying to keep the Jungle of Chult within the tropics. However, various older maps of Faerun have considerable variations in distances. Pending new updated maps from Mike / WoTC, I thought it would be reasonable to shift the whole map at least 4 degrees North, putting the Southern edge at 28N and the Northern edge at 56N. You could probably shift at least another 4 degrees depending on which map you use as a reference.
This also moves Baldur's Gate to about San Francisco, Waterdeep to Portland, and Neverwinter to a bit North of Vancouver, BC.
So in this version — I'm using the higher resolution tiled image from Part II — you get the following corners:
The midpoint for calculating the width is at 42° 7'0.00"N.
And here is how it looks. 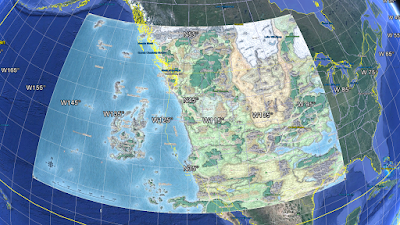